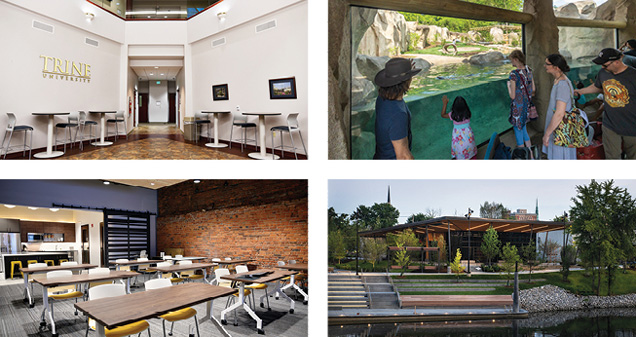 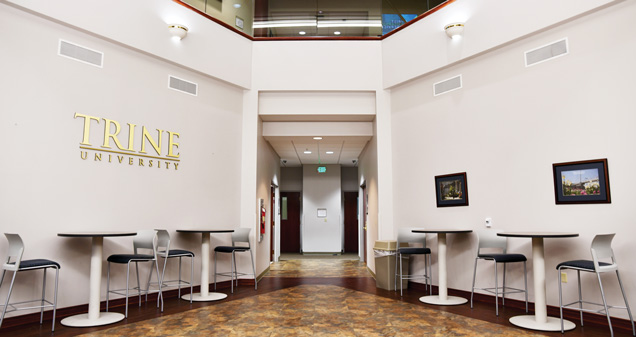 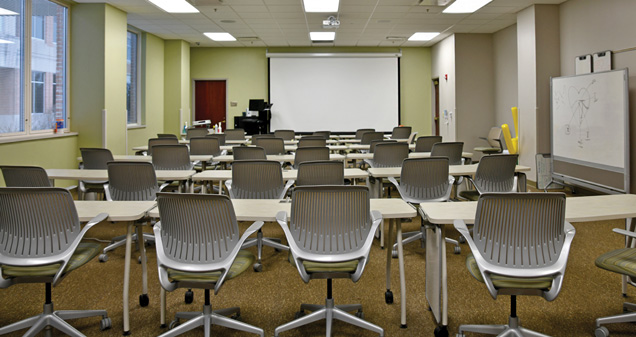 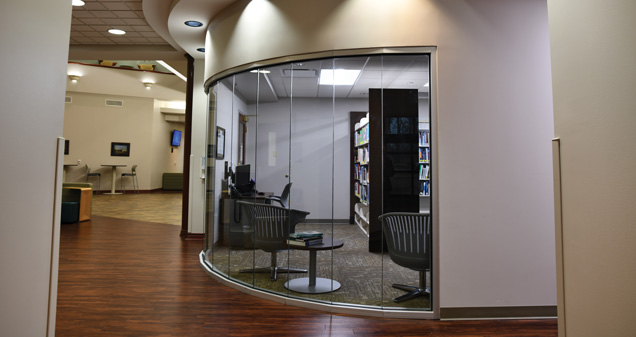 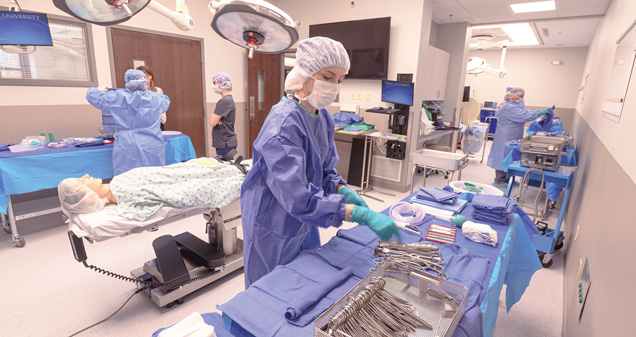 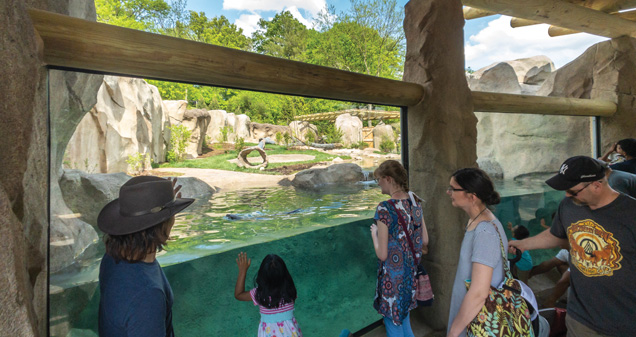 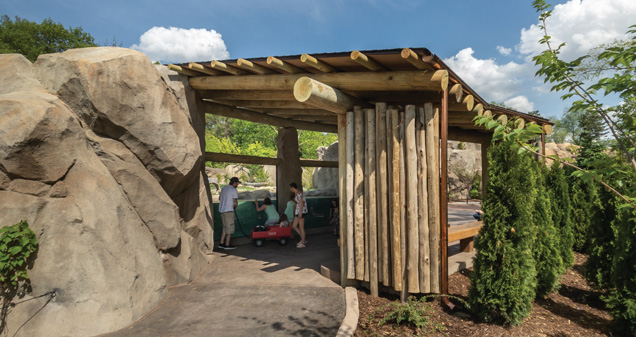 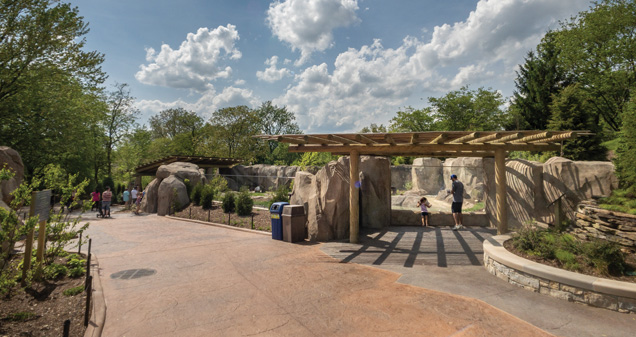 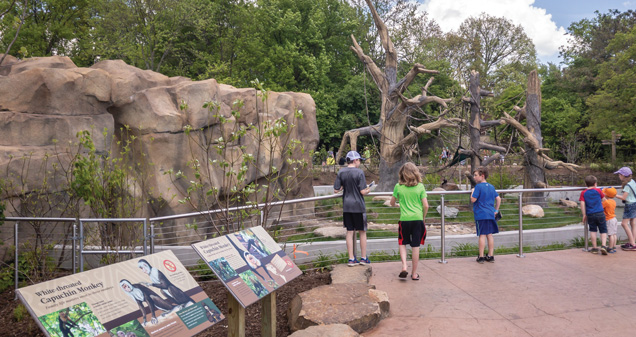 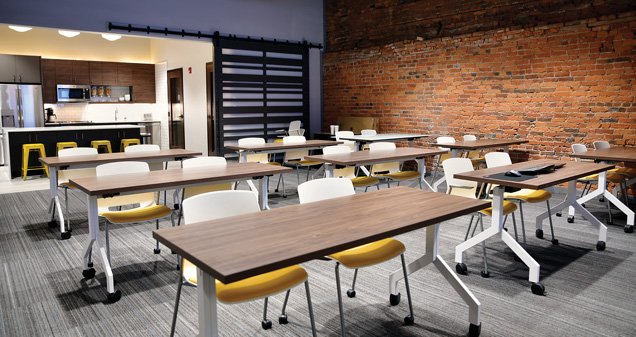 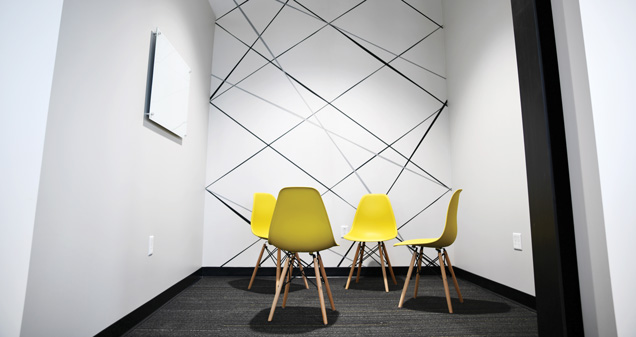 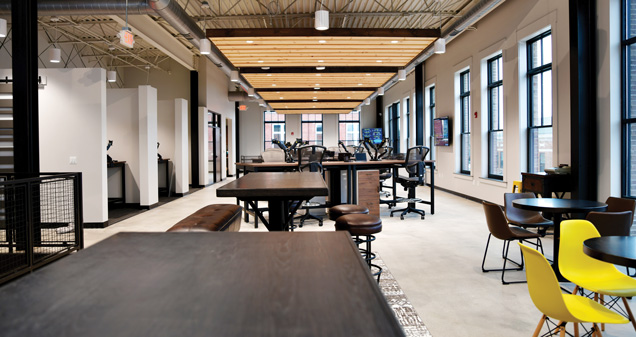 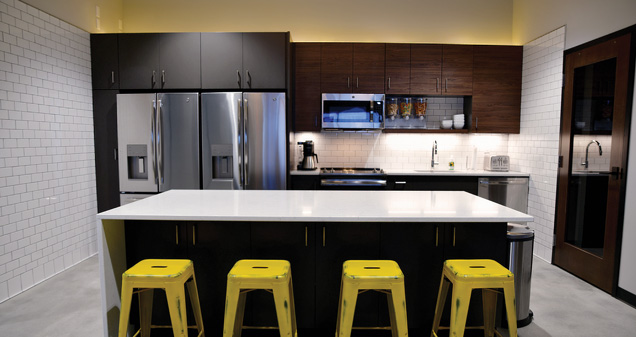 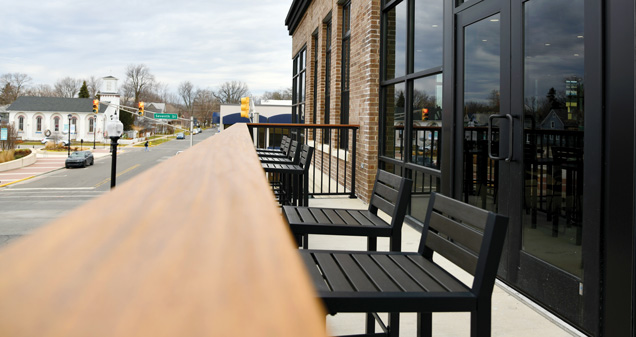 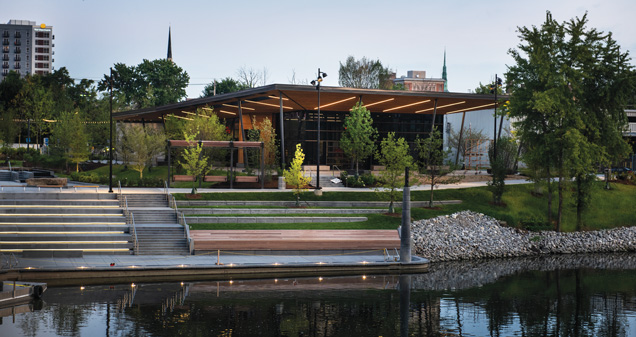 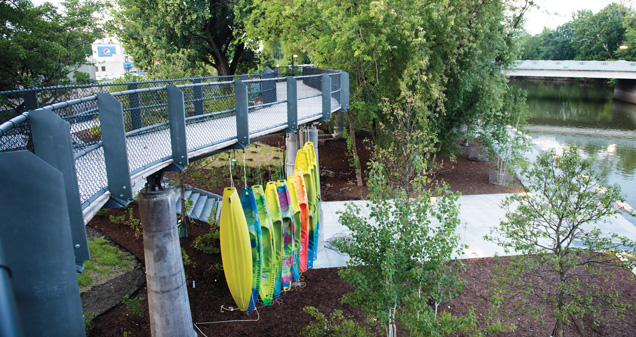 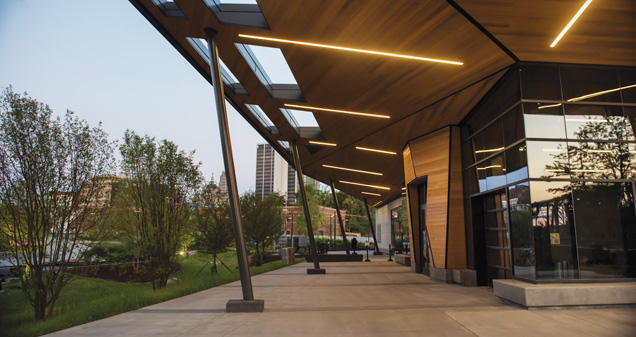 The Building Contractors Association of Northeast Indiana and sponsor Irving Materials, Inc. are proud to announce winners of the 17th annual BCA IMI Excellence in Construction Awards. The program recognizes outstanding commercial construction projects completed in the previous year and located within a 75-mile radius of Fort Wayne. Awards were given in four categories: Renovation Under and Over $2 Million and New Construction Under and Over $6 Million. Project submissions were judged by a panel of industry experts using set criteria for uniqueness, significance/impact to the community where constructed, BCA member involvement and the job safety record.

The Trine University Surgical Technology project submitted by Michael Kinder & Sons, Inc. (MKS) took top honors in the Renovation Under $2 Million category. MKS was the design-builder for the project.

Trine University’s main campus is in Angola; however, the growing need for occupations in Health Science in the Fort Wayne area caught Trine’s attention. Trine acted and opened its current Rinker Ross School of Health Sciences Education Center in 2013, quickly seeing the potential for more programming opportunities. With only one other Surgical Technology program in the area and the high demand for these positions, Trine added the Surgical Technology program, creating more opportunities for Fort Wayne students. The Surgical Technology space shares a building with two other graduate programs from Trine University – Physician Assistant Studies and Physical Therapy.

For the Surgical Technology Program, Trine University wanted to replicate the experience that graduates would encounter as surgical techs. This rare space required months of strategic planning to ensure that every specialty room would emulate the “real life” hospital/surgical feel. The MKS design team worked hard to retrofit Trine’s dream program space into the existing footprint of the building. The building already had offices, operating rooms, preparation spaces and a lounge area, which were all upgraded and updated to save the university money and to fit its program needs. Most of the project planning went into the state-of-the-art operating rooms, pre-operation area and sterile processing department. In the operating room, students can work alongside surgeons, anesthesiologists, registered nurses, and other personnel to provide direct patient care. With access to real-life surgical rooms, students can learn to prep the rooms, ensuring proper equipment and supplies are available and ready.

The scope of the project includes a full renovation of Monkey Island, the habitat for the Zoo’s Capuchin monkeys, and the creation of a new North American River Otter Exhibit and associated walking paths. Construction began in the fall of 2017 and was completed in the spring of 2019. The project included a sophisticated phasing plan that allowed the public to travel through the central Zoo while construction was in progress.

Every project at the Fort Wayne Children’s Zoo is unique, whether it is working with specialty rock formations, thickened exhibit glass or unique imported wood products for rails and trellises. Everything is essentially a “one-off” type of construction process. Add to that the challenges of Midwest weather and the Zoo’s short off-season, all parties involved must be in sync for a project like this to go well, finish on-time and within budget.

The Fort Wayne Children’s Zoo is a top-ten rated zoo by Trip Advisor and is a cornerstone for learning, excitement and entertainment in northeast Indiana. The newly renovated Monkey Island and the new North American River Otter Exhibit provide unique opportunities to get closer to the animals, and the exhibits themselves provide better living situations for the animals. It is not by accident that the Fort Wayne Children’s Zoo is in a class by itself!

Team Quality Services’ new corporate office won under the category of New Construction Under $6 Million. Michael Kinder & Sons, Inc. served as the design-builder, and Elevatus Architecture was the architect for the project.

This project commemorates the unique history and character of an old community gem while highlighting the innovative and crisp approach to new construction and design. TQS’s new location was previously the Auburn House of Pancakes, a dearly loved locale within the Auburn community. In the fall of 2018, demolition began, in which most of the building was torn down.

TQS’s President Chris Straw understood the best way to impact a community is by driving development and revitalization into it. This happened with TQS’s commitment to expanding its headquarters. TQS took a quiet block and filled it with more than 14,000 square feet of administrative and operational space.

Natural, exposed brick from the original structure was used throughout the building and modern, yet industrial, brick and iron were incorporated into the exterior. This additional square footage and growth will add more than 20 new jobs to the area with space available for small businesses and boutique shops to lease space.

Taking top honors in the category New Construction Over $6 Million is Promenade Park Fort Wayne Riverfront Phase I submitted by The Hagerman Group and Design Collaborative. The ambitious scope of this project involved the transformation of the north and south banks of the St. Marys River – bordered by the Harrison Street Bridge to the east and the Wells Street Walking Bridge to the west – into a signature space for recreation, relaxation, and reflection in downtown Fort Wayne.

The project site covers over 4.5-acres, and one of the key components – the Pavilion – includes over 6,400 square feet of space under roof. A strong mix of public, philanthropic and private funding covered the $20 million cost of this Phase I Riverfront Project. Construction began in August 2017, and grand opening ceremonies took place on Aug. 9, 2019.

Given the unique site and project components, construction involved a mix of significant earthwork, pilings, concrete, structural steel and other processes and materials. Examples of the many unique materials used include imported South American wood and the mesh railings and fencing now installed along the Tree Canopy Trail.

Design Collaborative was the Lead Architect in the Riverworks Design Group that was assembled for this project. The Hagerman Group served as the Construction Manager for this historic engagement.

This project adds a different dimension to the rebirth of Downtown Fort Wayne, the activation of our rivers and immediate surrounding areas,and the growing pride in the place we call home. Promenade Park clearly shows that Fort Wayne cares for its downtown, and that will pay dividends for years to come. 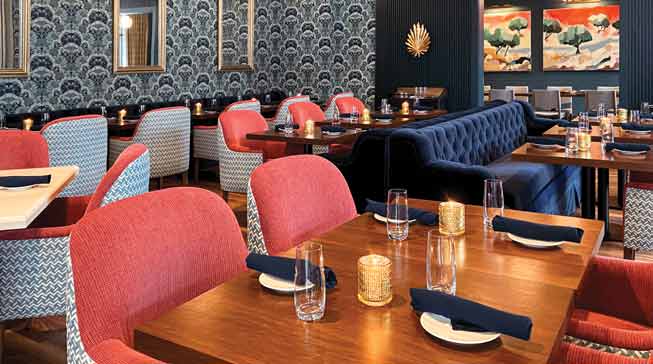 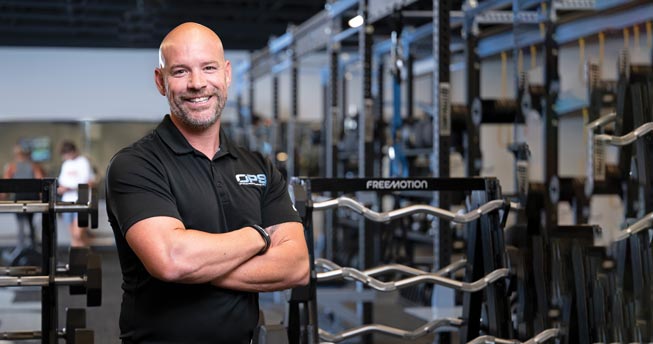 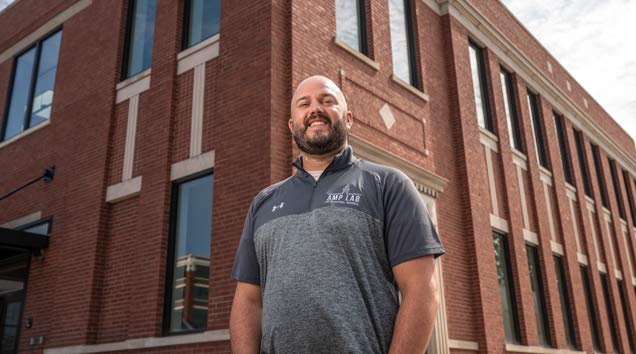 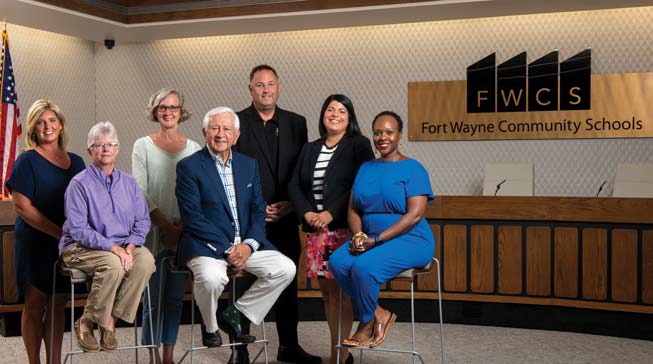 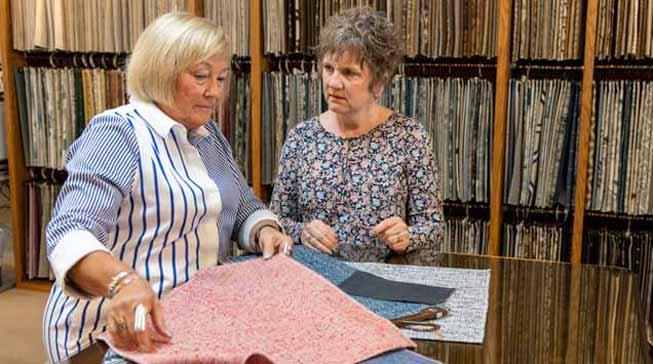 Where People Matter Most Wayside Furniture & Flooring in Angola, Indiana offers a distinctive experience for customers. 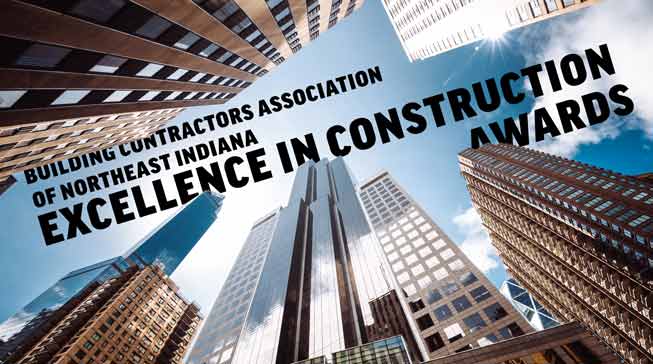 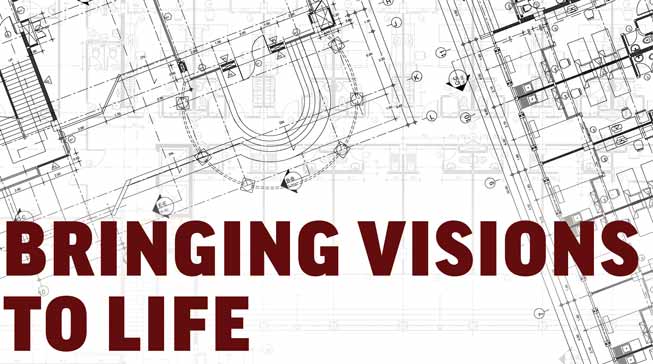 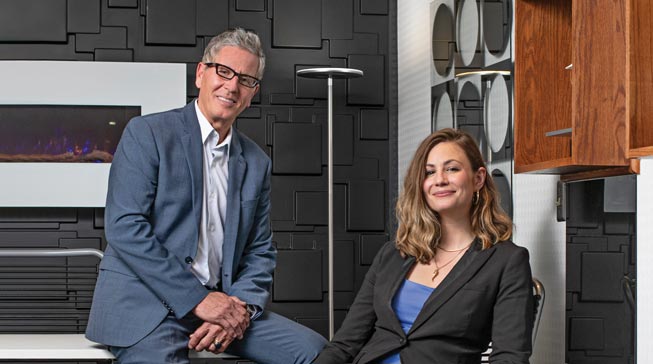 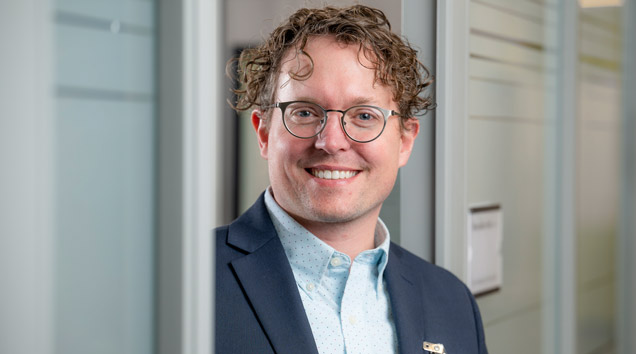 Connections The coronavirus pandemic pushed virtual health care to a whole new level and Parkview Health is setting the stage for the next phase.